Murtha's pie-hole opens even wider..He won't give up the fight for defeat!


In it, Murtha says,

"It's worse now today than six months ago when I spoke up initially."

Errr... Mr. Murtha? My kid is one of those young men with heavy packs and 70 pounds of equipment, and on his behalf, I'd like to politely say, "SHUT THE FUCK UP, YOU MORON!"

It has been often said if you repeat a lie often enough, it becomes perceived as the truth. But even Murtha's lies can't stand up to the muster of the truth that because of the efforts of our troops and their leaders, WE ARE WINNING.

Murtha goes on to say that the money we are spending in Iraq is taken away from social programs and the like. Well, Mr. Murtha, the last time I checked the Constitution, one of the principle roles of government was to PROTECT ITS CITIZENS from danger and go to war if need be to accomplish those ends. If we did things your way, Murtha, Zarqawi would be running things in Iraq and Iraq would turn into one big safehouse and base of operations for Al Qaeda, dickweed.

Murtha goes on to say that our grandchildren will be paying for this war; if that's the case, then I better have grandkids pretty quick, because thanks to the Bush-propelled tax cuts, the deficit is shrinking, and is currently on pace to remain that way.

Yet despite evidence to the contrary now so ubiquitous in nature that it cannot be ignored, hoping against hope, Murtha does his best to pursue his "Baghdad Bob" impersonation: 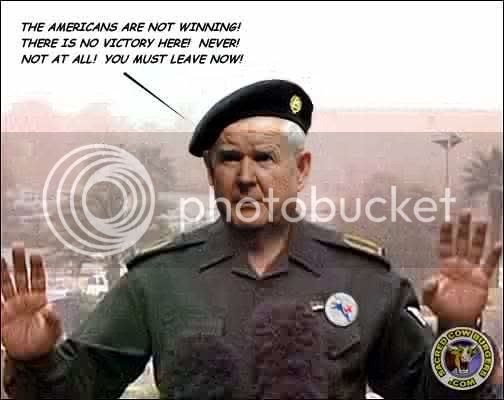 " We can go to Okinawa. We can redeploy there almost instantly."

Okinawa??? Just what century are you living in, Congressman Murtha? Should we redeploy to Iwo Jima next?

Thank you Jihad Johnny... for nothing.

Oh, and BTW, next time you talk about Rove's "fat backside," you may want to take a rearward glance in the nearest mirror, slob.

Thanks for your support to help oust Murtha this November!

Blackfive has a great piece that tears Murtha's arguments to shreds...